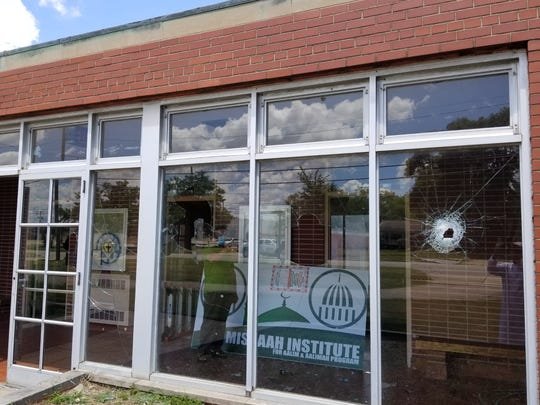 A new mosque in Warren on 10 Mile Road was vandalized, Muslim leaders said.

The Al Ihsaan Islamic Center, also known as Ideal Islamic Center, was opened a few months ago by immigrants from Bangladesh in what was previously a Lutheran church. On Friday afternoon, someone smashed several windows of the mosque with a hammer, according to the imam, Muhammad Islam.

A piece of the hammer broke off and fell inside the mosque, Islam told the Free Press on Monday. He speculated that if the hammer had not broken, more of the mosque might have been vandalized.

He said that a neighbor has video footage showing the person who attacked the structure driving in a car outside the mosque.

Warren police did not comment on the incident. A police lieutenant referred phone calls to Warren Police Commissioner William Dwyer; a message left with Dwyer’s office was not returned Monday.

Islam and the Michigan chapter of the Council on American-Islamic Relations (CAIR) expressed concern that the vandalism may have been a hate crime.

“Because of increasing hate incidents targeting houses of worship and minority communities nationwide, we urge local, state and federal law enforcement authorities to investigate this act of vandalism as a possible hate crime,” Dawud Walid, executive director of Michigan CAIR, said in a statement.

The mosque was established by Muslims who are moving from Hamtramck to Warren, according to a video by the mosque on their website. The leaders said they have made a down payment and are raising money to convert the former church building into an Islamic center.

“Since the year of 2010, many Muslim communities … moved to the city because of its good environment, job opportunities,” the video said. “Once the church has (been) purchased, it will be reassembled into a Muslim mosque and Islamic institution. The Muslim community will then gather to worship Allah and gain Islamic knowledge.”

The mosque currently only has daily and Friday prayers, but hopes to have “a variety of courses, such as Quran memorization, science of hadith, fiqh (Islamic jurisprudence), sirah, Arabic, Bengali, and English languages. It also prepares students to deliver effective khutbah (Friday sermon) speeches and our activities.”

The building is 12,000 square feet with a 100-car parking lot. Leaders want to make a 4,100-square-foot prayer area where more than 500 people can pray at a time, according to a fundraising brochure.